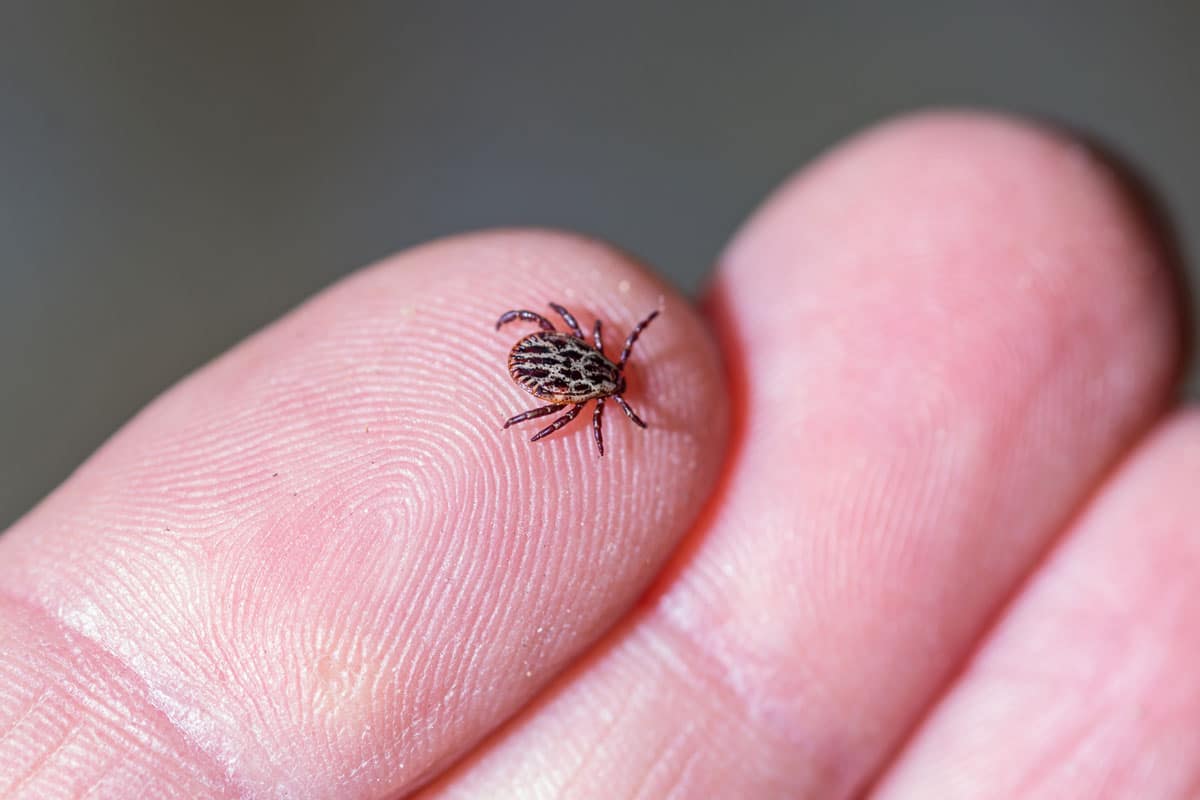 I want to tell the story of Lyme from the perspective of my son. He is a 3y/o boy living in Staten Island, NY. One fine summer day, he developed a rash on his arm that looked like a bullseye. Aside from the rash he felt absolutely healthy and happy. As a pediatrician, I knew that the rash he had could only come from an infection with borrelia burgdorferi (the bacteria that causes Lyme disease). When we clearly see that rash, there is no need for blood testing so he started taking antibiotics right away and the rash and disease resolved. Am I worried that he will develop complications or long term symptoms from Lyme? Absolutely not because this bacteria is very susceptible to antibiotic treatment.

According to the NYC Department of Health, Staten Island is one of the highest prevalent Lyme areas in the country as the deer population has dramatically increased in the past 20 years. The Ixodes aka Blacklegged aka Deer tick is the only one that spreads lyme disease. Lyme disease is the most common tick borne illness in the city. Although deer get a bad name for spreading lyme disease (carrying blacklegged ticks) it is not totally their fault because the bacteria that cause the disease are spread from white footed mice that are bitten by ticks and then that is transmitted to humans by the bite of a tick.

According to Dr. Andrea Love (microbiologist and immunologist) There are many types of ticks that live in nature and not all ticks are infected, only about 2 out of every 10 ticks will have lyme disease. Ticks need to drink blood to survive but they cannot fly around like mosquitoes to get to animals/ humans to drink their blood so they sit on blades of tall grass with their legs sticking out hoping to grab onto (usually the leg) of a creature that walks by. Once it grabs on it may bite right away or it may crawl up onto a person’s abdomen, chest armpits or other warm moist area. Then the tick has to bite and drink blood very slowly. As it is drinking blood that activates the bacteria inside the tick to exit. This process takes a minimum of 24-36 hours so for those people who look for ticks on their bodies every time after coming home from playing in grassy areas they can eliminate their chances of having to worry about infections.  The longer the tick stays on the body the more likely it is to transmit lyme disease starting out from 10% at 36 hours up to 70% by 72 hours. The majority of people who get infected with lyme disease don’t know they have had it because their immune system kills the bacteria without the help of antibiotics. This helps explain why this disease wasn’t identified until the 1970’s even though the bacteria has been around for perhaps 60,000 years or more.  Also, as we continue to encroach on the natural habitat of wildlife, more people will be at risk for catching lyme.

The American Academy of Pediatrics Red Book on Infectious Diseases states that Lyme disease is a bacterial infection that is curable (just as many other bacterial infections) with a short 2-week course of antibiotics. The rash that my son had could appear anywhere from 3- 362 days after a tick bite. The antibiotics prevent the rare complications of the infection including heart (only 14 cases documented), eye, joint, and brain inflammation.  Lyme disease cannot be transmitted from person to person, not even through intercourse or breastfeeding.

Protecting your family from this illness requires  a few steps. 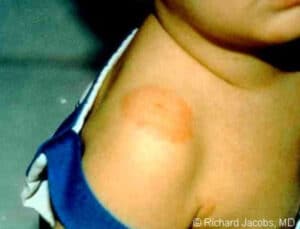 Image above of target-like rash From the AAP Redbook: 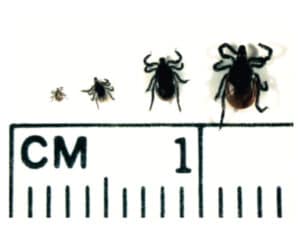 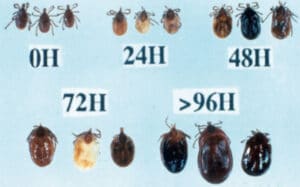 Top Image: Relative sizes of a tick from left to right : larva, nymph adult male and then adult female. Bottom image: sizes of tic after they drink blood meals depending on how long they have been attached. Photos source: Wormser, Gary P., et al. “The clinical assessment, treatment, and prevention of Lyme disease, human granulocytic anaplasmosis, and babesiosis: clinical practice guidelines by the Infectious Diseases Society of America.” Clinical Infectious Diseases 43.9 (2006): 1089-1134.